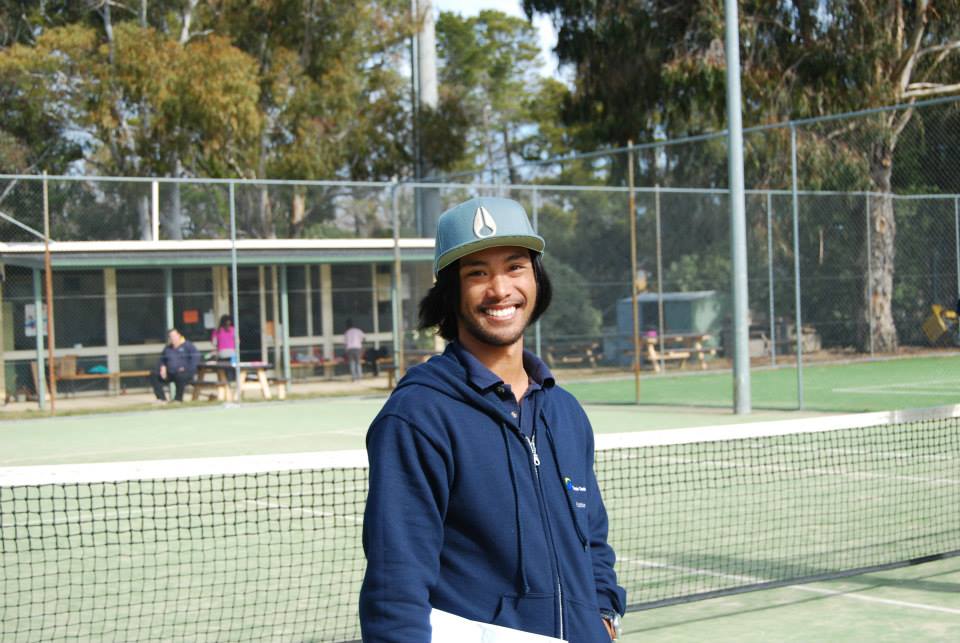 Overwhelmed with the colourful people I interact with every single day I’m so blessed to be in a community that means more to me than you could possibly imagine. Tennis Canberra started from a tough time in my life and with a smile on the surface not many people knew the extent of suffering I went through during the darker times. I’m able to share my story now as I’m finally able to let go of past ties and move forward into something that I know is special to not just me but everyone involved.

Time for growth – I’ve been fired! (June 2013)
Coaching casually since I was 16 I’ve always had a job in the tennis industry. Helping out almost every coach in Canberra in my 20s I decided to dedicate my services to one tennis academy for over 5 years. With the realization I wasn’t going anywhere and the minimal learning opportunities at the time I started looking for something with good intentions of finishing my role at a club I helped build. My plans were leaked from people I trusted and within 24-hours I was fired by guys I thought I had more than a business relationship with. With more of an emotional punch in the face rather than a ‘I don’t know what to do mentally’ lesson one of business was handed down to me as I never wanted anyone to feel what I felt that day. You should always be good to those that help you. This is what I live by today and 4-weeks later Tennis Canberra was established – well Prestige Tennis Academy Canberra… From one, to two, to seven classes a week momentum started to grow. Past players heard about my venture and the snowball started to grow (mind you it was a very cold July in 2013). A dream start for a young yet experienced tennis coach – and yes just a tennis coach. Summer of 2013/14 I quickly found owning a tennis academy isn’t just being a good coach and delivering great sessions. There is the legal-side of things and many people get very particular with what you promote. With the attainment of our proud name Tennis Canberra on great business advice from my friend and website designer heads quickly turned and my second lesson in business was presented in front of me – Don’t be bullied by the bigger guys you are entitled to owning great ideas! This wasn’t a easy “ignore and move on situation”, this was one of the most stressful times of my life which lasted beyond half-a-year. It got to a stage I was considering giving up as I wanted to promote the game I love but I had a bigger body who was meant to help us out doing the complete opposite. This debacle was cleared up just before Christmas of 2014 and finally my growing number of talented coaches could knuckle down and do our thing.

Happy little Vegemites we were in the Summer of 2013/14. With some great people on the team and some amazing people that joined the club in 2014 we had the blueprint to have some fun and create a culture I’ve always envisioned. Personally I had a good partner, family liked me (they didn’t always) and business was running smooth. Thing were finally in motion and I was on cloud-nine! I was doing something I loved, I had skip in my step and had good people around me – just try and stop me world. The world answered and everything fell to shit on my 25th birthday.

August 9th marked the 1st Junior Club Challenge I’ve spent 6-months planning. The evening before the the event (my birthday) I came home to my brother in tears. Long story-short we got word our cousin Chrystal in Sydney was rushed to hospital – we all knew it wasn’t good. I called my cousin (her brother) who I did everything together growing up but wasn’t really speaking to each other at this stage of our lives telling me this is bad… and it was. Unfortunately our dear Chrystal attempted suicide that day and with doctors working on her through the night it was a waiting game to see if they could save her. My parents headed to Sydney early morning and my brothers and I stayed back and proceeded to go ahead with the Junior Club Challenge the morning. It was a relaxing brotherly activity before we faced the toughest day of our lives. With the coaches alerted about our emergency there was no hesitation in shouldering the extra load that was placed upon them. With the success of the Junior Club Challenge my brothers and I made our trip to Sydney. Not many words were said in that 3-and-half hours.

Sadly, we got there a couple minutes before the doctors came out to deliver the news – Chrystal has passed away. These were the darkest days of my life and back to the tennis academy it was.

With everything happening with the passing of Chrystal I came back to a very supportive community. A week later a guy I went to University with died in a bus crash overseas and many emotions started to escalate.

My tennis family was my rock and those that saw me everyday saw the pain I was in. This did not stop them from doing everything in their power to support me and my family while delivering quality tennis lesson. I would go home early, I would be in the background when I was coaching with another coach and I wouldn’t be active on the admin side of things. The show went on and although I started drinking a little bit too much to deal with my grief and adding to the pain another slap in the face with my girlfriend at the time being forced to leave the country because of visa issues. With the toughest Christmas to date and the feeling of lost and nothingness this was the darkest time in my life. The crash of 2014 came with a never-ending ring in my head! With a few trips to visit the girlfriend in Philippines and Malaysia things just got too hard and on my 27th birthday that relationship ended while I was holidaying in New Zealand to be away from the 1st year of the passing of Chrystal. Life continued and the tennis academy was growing by the day. All the coaches grew into their own and with them in the dark about my emotional instability our tennis academy was in full swing. Anytime we’d get stuck someone would come through with the goods. We celebrated birthdays of clients, we attended charity events, we had fun! Everyday I was at tennis things were good, unfortunately I had to go home and I’d slip back into the deep corners in my mind usually by myself and alone. I don’t use a New Year as a turning point for anything however I needed this year to come to an end sooner than later. Brighter Skies – Where there is rain, there’s a rainbow… somewhere (2am: 12.07.2016)
I write this from Kuala Lumpur Airport after a missed flight to my next destination (that’s a story for another day). I now have a 13-hour layover to reflect and gather my thoughts. After spending a couple weeks with coaches – James and Myles looking back on what we’ve built and sustained through the tough times is something our team can be proud of.

It was great to see James compete in the Osaka Triathlon after watching him schedule our Tennis Canberra programs around his training. His passion, professionalism and dedication towards his Triathlon is something special and proud to have him as a coach at Tennis CBR. Spending 2 weeks with Myles (who I met playing tennis at 10 years of age) was mind-blowing. We looked back at the first trip we went to Rockhampton for Bruce Cup and couldn’t believe the different paths we took to remain in a sport we truly love – Thanks for your help over the years mate! With Avi steering the ship back in CBR while we recharge we can only see positives for the future of Tennis Canberra.

All our coaches and tennis family members have their own story on the impact tennis has on their lives. Mine is just one of many that can say tennis was and still is my everything. I have so much to give back to tennis and I hope this reflects within our tennis programs and tennis community.

I hope to use my experiences to inspire our future players and encourage those that never been on the court to give tennis a go as tennis is much more than a sport that you can play for life.

Over the next two terms you will be reading stories of some of our coaches and others in the tennis industry. I’ve got a fair idea on the journey many of us tennis players have had but looking back on my own journey who knows what we’ll learn. I’m looking forward to sharing these with you and hope you understand what we are building here at Tennis Canberra – we are more than tennis!