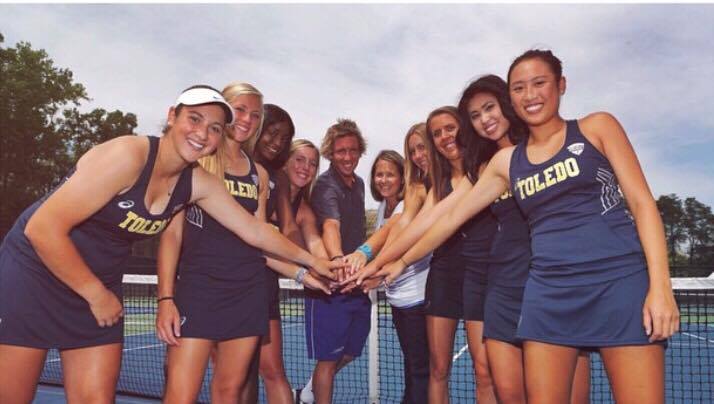 To say tennis has been an important part of my life would be an understatement. The image of running to the tennis courts every lunchtime as a fresh faced grade seven student in the hopes of somehow giving myself a chance of getting a coveted spot on one of our two courts is forever etched into my mind. At the time I never could have imagined the places tennis would take me.

I quickly began playing tournaments outside of Canberra and my passions in life became evident. In the beginning it was local and regional tournaments but before long I was traveling around Australia and New Zealand playing national and junior tour tournaments while building friendships that I still have to this day.

As high school graduation approached it became evident that my dreams of playing on the senior tour were not going to happen and it was time to pursue other options. My ever growing love of travel coupled with my will to be successful on the tennis court led me to the US to play college tennis. Packing my life into a suitcase and a tennis bag and traveling to the other side of the world to live for four years as an 18 year old felt like a dream at the time. I look back on it now with a sense of pride and smile at where the wind has blown me since then. Starting my freshman year in college brought with it a mix of nerves and excitement and while I experienced my fair share of ups in college tennis, they didn’t come without first suffering the lows. My freshman year in college was by far the hardest year of my life. I went to the States expecting to be greeted by beautiful girls, endless parties and huge amounts of success on the tennis court and in the classroom. Although I managed to be extremely successful in my academics while attending my fair share of parties, the rest of my expectations were not met. Instead what I was met with were impossible training sessions, constant matches spent sitting on the bench and a whole lot of yelling from my coach. It was hell and I wanted out. I turned my priorities elsewhere and used my Australian accent to my advantage to land myself my first real girlfriend. I thought I was happy but the truth is I was digging myself into a hole. After putting on my freshman 15kg and being kicked off the team for apparently showing a lack of dedication and work ethic, the hole finally got too deep when I broke up with my girlfriend at the time. I had told myself that was it, I was booking my flights and coming home- it was a nice dream while it lasted but I quit. Sitting in chemistry the next morning my plans changed completely when I got a message from one of my good friends telling me I could transfer to his school and play under a coach that had seen me win a high level junior tournament in Tasmania the year before. I look back and laugh at how casually I picked up my books and walked out of the classroom and out of the school. My next three years were spent playing for South Dakota State University and although the weather was not entirely welcoming, my teammates and coaches were. My memories of South Dakota are some of the best I have. I earned a degree with a GPA I can be extremely proud of, won tennis matches I probably shouldn’t have and built relationships that I will have forever. My dreams of American college finally came to fruition. As my time at South Dakota came to an end I knew my playing days were over but I wasn’t done with tennis. I reached out to every single US College with a master’s program in exercise science and a tennis team in the hopes of being a graduate assistant coach. Thankfully my prayers were answered by head coach Tracy Mauntler at the University of Toledo.

The following two years were spent in Ohio as assistant coach to a division 1 women’s team. I was lucky enough to travel around the continental US and Puerto Rico attending coaching conventions and coaching and hitting with a team that ended up becoming quite successful. I will be forever grateful for the opportunity Tracy gave me and the doors that position has opened for me.

Upon graduating from my master’s course in 2015 a series of events led me back to Canberra and eventually to Tennis Canberra. Having the opportunity to coach next to people I have been friends with for years is something I cherish. The last three terms working for Tennis Canberra have shown me what it means to be part of a community where people care. This became extremely evident having Myles and Robbie join me in Osaka at the start of July to support one of my triathlon races. Having their support and seeing their pride in my race was something I will never forget. I am not one to get too emotional but it was impossible for me to put my appreciation into words. As with anything there are times of frustration but I completely believe we are a family. These feelings were confirmed in Japan. I am excited to see my Tennis Canberra family out on court this term and hope to pass on some of the things I have learned along my journey. The topic of conversation when I speak to Robbie is often giving back. As term 3 commences I am determined to give back to a sport that has given me so much. A sport that is so wonderful that even without doing anything you’re surrounded by love.